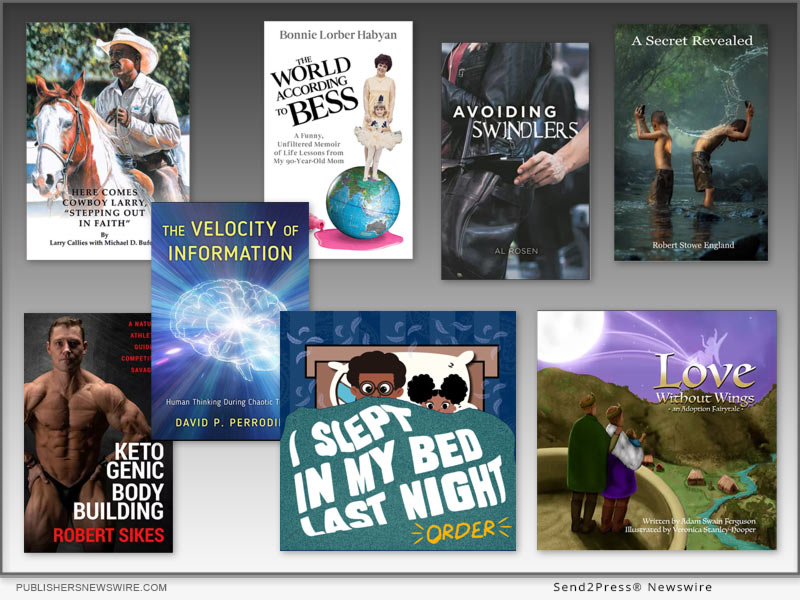 TEMECULA, Calif., Nov 24, 2022 (SEND2PRESS NEWSWIRE) — Publishers Newswire (PNW), a news publisher covering books, music and software launched in 2004, has announced its annual “books to bookmark” list of 10 new and interesting reads from small publishers and self-published authors in North America published in 2022. These books are often overlooked due to not coming from major traditional book publishing houses.

“A notable trend in 2022 was the illustrated children’s book, teaching youngsters to deal with grief from loss of a loved one, or explaining the pandemic, or both,” says PNW editor and publisher, Christopher Laird Simmons, who has worked in the publishing world since the late ’70s, and is also CEO of the website’s parent company, NEOTROPE®. “Adoption and memoirs were also a trend in small publishing, more so than the common business and financial books, or general adult fiction. For our annual list we’ve picked a diverse and worthwhile line-up for avid readers to discover.”

Herewith are 10 interesting reads worth a look (alphabetical order, based on book title):

“A Secret Revealed” (ISBN 978-1954682351; J2B Publishing; 136pp) by Robert Stowe England is debut novel, tells the story of Dean Farley, a young boy growing up in post-World War II America trying to gain confidence in himself by earning the respect of his parents and peers. A small North Carolina community is the crucible Robert Stowe England, a veteran financial author, uses in “A Secret Revealed” for Dean to figure out if he has the mettle and ability to handle adult life.

“Avoiding Swindlers” (ISBN: 978-0228881179; Tellwell Talent; 360pp) by Canadian author Al Rosen, is a book full of warnings based on true events. Investors lose multi-millions of dollars to financial tricksters. Social media and new investing apps have encouraged new investors to buy into “hot tips” – this has created more hazards and swindlers. Al Rosen wrote “Avoiding Swindlers” so individuals can learn to identify red flags. Al Rosen has served as a university professor (holding a PhD) with several qualifications in the fields of investigative accounting and reporting (such as acting as a fraud examiner) for over 35 years.

“Here Comes Cowboy Larry, Stepping Out In Faith” (ISBN 978-1667838816; Reality Marketing And Design; 116pp) is the biographical story of Larry Callies in his own words, where he dreamt from the age of ten of becoming a Cowboy; and his spiritual journey as man of color to the founding of the First Museum honoring the long history of the Black Cowboy Heritage. This must-read story shares insight into Larry’s unshakeable grit, unrelenting compassion, unbending stubbornness, and unmistakable kindness which Larry cultivated while growing up in a segregated Southeast Texas over three decades on ranches, singing Country Western songs at the then segregated Gilley’s Nightclub with Gilley’s all white band, and life-risking bull penning jobs. Larry is a professional cowboy, singer, writer, and museum curator.

“I Slept in My Bed Last Night” (ISBN 979-8985784404; WF Publications; 32pp) by seven-year-old author, Sammy Wallace, is his debut rhyming children’s picture book. The book is a comical story about a boy who finally decides to sleep in his bed. While fast asleep, a mysterious monster wakes him up from his dream. Confused as to exactly what the monster is, and what the monster wants, the brave boy contemplates a series of possibilities as he tries to unlock the mystery. Sammy created the premise of the book at the beginning of the COVID-19 pandemic in Los Angeles. Due to school closures, Sammy kept busy with his imagination and often composed stories with his grandmother, Dr. Gwendolyn Mukes, who transcribed the book for him, and felt that it was important to help Sammy find his literary voice while maintaining a sense of wonder and imagination.

“Ketogenic Bodybuilding: A Natural Athlete’s Guide to Competitive Savagery” (ISBN: 978-1956955071; Savage Sports LLC; Legacy Launch Pad Publishing; 448pp), the first book by Robert Sikes. While Sikes was always interested in competitive bodybuilding, the “bro dieting” approach based on junk calories, extreme caloric deficits and carbohydrates resulted in disastrous side effects. The book is the result of Sikes’ experiences as a professional bodybuilder and fitness coach, specifically his transition from carbohydrate-based training protocols to ketogenic ones, and its resultant performance benefits.

“Love Without Wings: An Adoption Fairytale” (ISBN: 979-8986768014; BookBaby; 36pp), by Adam Swain Ferguson and Illustrated by Veronica Stanley Hooper, was inspired by a true story – his own story – and celebrates diverse families made complete through adoption. While “Love Without Wings” is written for children, it’s also the perfect read for adoption agency staff, counselors and teachers in search of a positive educational tool.

“ScootieToots and the Feathers From Heaven: A Family Healing Book” (ISBN: 978-0228866862; Tellwell Talent; 66pp) by Audri B. Cabness is a whimsical children’s story with a powerful message that offers families an uplifting vantage point, at any point in their healing process, from which they are given the opportunity to begin to pivot from despair to serenity. CABNESS is an author from the United States, and is also the founder of The Sebastiens Smile Foundation. Cabness endured the pain associated with the loss of her beloved infant son, in whose honor the book was written.

“The Velocity of Information – Human Thinking During Chaotic Times” (ISBN: 978-1475865455; Rowman & Littlefield; 208pp), authored by David P. Perrodin, Ph.D., rigorously clarifies and deepens how we think about societal human behavior and mental health during days, weeks, months, or even years of chaos. This is an invigorating scholarly work for all audiences. Utilizing several in-depth personal interviews and explorations of historical and contemporary events, “The Velocity of Information” provides a functional and realistic roadmap with specific, actionable guidance on how to navigate chaos. Perrodin is an author, researcher, professor, and host of “The Safety Doc” podcast. Dr. Perrodin is a speech-language pathologist specializing in psycholinguistics.

“The World According to Bess: A Funny, Unfiltered Memoir of Life Lessons from My 90-Year-Old Mom” (ISBN: 978-1956955330; Legacy Launch Pad Publishing; 168pp), by Bonnie Lorber Habyan is a treasure trove of motherly insights and a “love letter” to her mother. Reflecting on their mother-daughter bond, Habyan details the hilarious and insightful things her mother has said and done over the years. In the latter chapters, she also examines how their relationship has been shifting as Bess battles with dementia. Habyan is a speaker and a chief marketing officer working in real estate in finance, and has had rich life experiences that include earning her MBA as well as being a corporate spokesperson, a news reporter, and a radio DJ for a call-in love songs program.

Publishers Newswire is an online publication founded in 2004, part of the Neotrope News Network, covering books and publishing, music and software news. Publishers Newswire does not endorse, “recommend,” or review any of the book titles mentioned, and the specific books mentioned are for informational purpose only. No fee or other consideration was paid for inclusion in this list.

Neotrope has been in the publishing business since the late 1970s, when then teenage founder Christopher Simmons published first “The Comic Collectors Comic Checklist” sold at the San Diego Comic-Con. The company went on to publish “The Galaxy of Fandom” a one-off entertainment magazine, and later “The Adama Journal” a fanzine for “Battlestar Galactica.” In 1982, “The Unicorn Hunters Guidebook” was featured in Playboy magazine. In 1987, a fanzine for “Star Trek: The Next Generation” called “Galaxy Class” launched. In 2008, the company published “FRACTOPIA” a coffee table art book by Simmons (ISBN: 978-0971055506; Neotrope Press).

The company publishing unit was originally called Silver Unicorn Graphics (S.U. Graphics and Marketing), became Mindset Press in 1987 and Neotrope Press in 1997. The Neotrope News Network was launched in 2004.

The company is also a leader in online advertising and marketing, public relations, music/video and multimedia. Neotrope is based in the Southern California wine country of Temecula. Neotrope® is a registered trademark in the U.S. and Europe. The company celebrates its 40th anniversary in Jan. 2023.

Christopher Simmons has been a working journalist since 1984 when he sold his first article to POLYPHONY magazine. Later writing for diverse pubs including Computer Player, Digital Imaging, Micro Publishing News, Spazz, the Graphic Artist’s Guild newspaper, among many others. He has been widely interviewed on topics related to technology, marketing, health and entertainment.

Learn more about Neotrope at: https://neotrope.com/ (website under reconstruction for 2023).

This press release was issued on behalf of the news source, who is solely responsible for its accuracy, by Send2Press Newswire. To view the original story, visit: https://www.send2press.com/wire/publishers-newswire-announces-annual-books-to-bookmark-list-for-dec-2022-10-great-reads-youve-likely-never-seen/