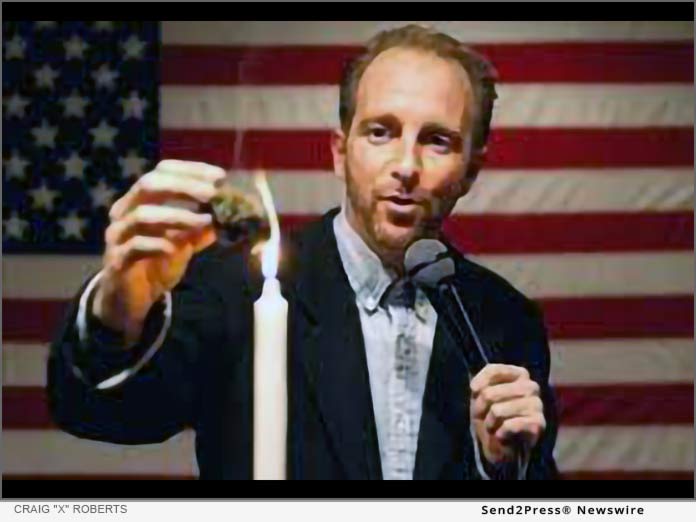 WHEELING, W.Va., Nov 23, 2021 (SEND2PRESS NEWSWIRE) — Pro-Cannabis Republican Candidate for Congress, Craig “X” Roberts (CraigX4Congress.com), The General Pharmer, was sitting on his hotel balcony overlooking the Caribbean Sea when an FBI agent from Wheeling West Virginia called his cell phone. The agent wanted to know about January 6 insurrection and the events that took place at the U.S. Capitol. The first thing the FBI agent said was, “You are not in trouble, and you don’t have to talk to me if you don’t want.” Telling someone they are not in trouble takes the pressure off.

The Candidate spoke about his experiences in Washington D.C. Tucker Carlson’s report “The Purge” was similar to what Roberts saw. That was why he was moving to Mexico. “I don’t think it is safe or stable to live in a country where two guys are claiming to be President at the same time,” he told the FBI agent, because to this day “Trump has not conceded the election claiming fraud as the only reason for Brandon’s victory. As the father of young children, I think it is best for my family to move to Mexico.”

Roberts commented, “All the once stable institutions of America are now dividing the people against each other. How is that a good idea?” One week ago, President Trump, who Roberts believes won the election, asked American First Republican Patriots to run against 13 “sellout loser RINOs” who voted with the Democrat Party on “a fake infrastructure bill” (only 11% for structural improvements).

Candidate Roberts said regarding January 6, “I went there that day with two girl friends who had never been to D.C. We weren’t part of any group.” Answering that because the agent asked, “I still think the election was stolen, but I am not going to take up arms against the current regime. I trust the American people to do the right thing and correct the election problem.”

West Virginia’s 1st District Congressional Candidate Roberts found Wheeling because he saw a sign on Highway 70, “Wheeling Marsh Stogies.” After being a reoccurring-regular on the TV show “Weeds,” working for Mike Tyson’s cannabis company and producing shows for the Cali Plug Studios that included a High Times show staring Jenae Alt, it was hard to imagine moving to the Ohio Valley in West Virginia, but the “stogie sign” was an omen.

“In 2017, when I was an online English teacher with students in China, I started having memorable dreams of working with President Trump. I didn’t vote for him, but I love his America First agenda, so I used to fall asleep listening to his speeches.” Roberts was certain that this was the cause of his Trump dreams.

“When I heard Trump ask for SMART Republicans to primary these traitorous RINOs I decided to look if one of them was in my District. I want my dream of working with Trump to come true.” What are the odds with 435 Congresspeople that Candidate Roberts would have moved to the District of a RINO? Is Mr. Roberts going to Washington?

Tim Robbins predicted the “conservative rebel” in his hit film, “Bob Roberts.” Now, Roberts, who has appeared in 15 cannabis films including “Haunted House of Chronic,” “How Weed Won the West,” “American Drug War” and “Totally Baked” to name a few becoming the living embodiment of the Conservative Rebel. He is pro-gun like Ted Nugent but looks more like Phil Robertson from “Duck Dynasty” than a politician.

“I agree with President Trump. The U.S. was attacked worse than Pearl Harbor or 911. This is Biblical because in my church we teach Fauci is the Rider on the White Horse of Revelation 6:2,” Roberts confessed. “I know the press will beat me up for this, but it is what I truly think. Besides torturing dogs, Fauci a false healer wearing a white lab coat as cover for conquering. He conquered the world with two things, the Corona, and a common cloth – a bow (GK tocson) – you can’t make this up!”

Roberts taught in Temple 420 that China and the U.S. are in an actual war even though it is undeclared. “This as a Biblical struggle between good and evil, an ideological war that I have been engaged in for a long time.” The Candidate calls himself a veteran of the Drug War. “My friend named me the General Pharmer because of my militant stance for hemp. I was an influencer before the Internet and there was such a word. I think I am one of the reasons the Chinese government banned Americans as online English teachers,” The Pastor Candidate laughed. “I taught their children to love guns, Jesus and freedom as I taught them English. When elected to Congress I’ll absolutely put America First.”

PAID FOR BY FRIENDS OF CRAIGX4CONGRESS

This press release was issued on behalf of the news source, who is solely responsible for its accuracy, by Send2Press Newswire. To view the original story, visit: https://www.send2press.com/wire/good-and-smart-america-first-republican-patriot-announces-primary-campaign-run-for-west-virginias-1st-district-against-a-sellout-loser-rino/