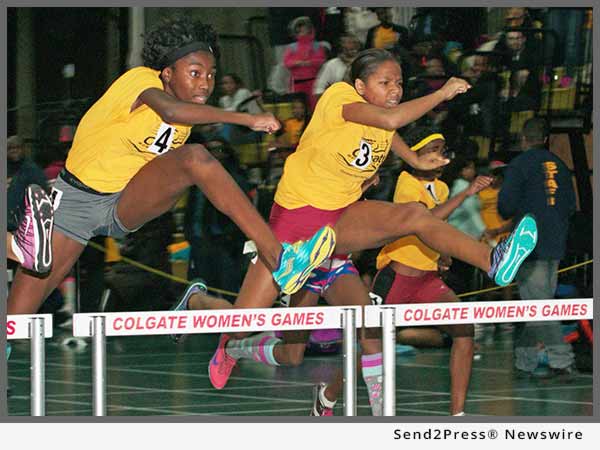 BROOKLYN, N.Y., Jan 17, 2017 (SEND2PRESS NEWSWIRE) — The final preliminary meet of the nation’s largest amateur female track series, the Colgate Women’s Games, featured athletes from every division achieving personal best scores this weekend, as thousands of participants competed for spots in the semi-finals to be held at Pratt on Saturday, January 28, 2017.

Meet Director Cheryl Toussaint said, “Thank you to all parents and coaches for your dedication and commitment through these four preliminary meets. It is our privilege to share in the role of helping your children discover and develop their abilities. Every competitor has been a success just by participating. The talent ran very deep this year, as we saw leading champions challenged by freshman new to their divisions, and some of the most gifted athletes at every age level compete at or near record pace, including some setting the fastest times and best scores in the nation.”

On Friday in the High School division, Iantha Wright of Queens won the 55 meters in 7.11; Sophia Myers won the 55 meter-hurdles in 8.28; and Philadelphia’s Ariana Ruffin matched her personal best 200 meters in 25.77. New Jersey’s Athing Mu made it a perfect season with another double win, placing first in the 400 meters in 59.03 and the 800 meters in 2:21.06. Kaylah Quarshie of Port Jervis, NY who has been in second place behind Shayla Sanders of Queens in the 1500 meters each week, achieved an impressive personal best 4:45.36 for the upset win. High Jump Champion and record holder My’Khiyah Williams of Brooklyn repeated her series’ best jump of 5’6″ to finish in first place; and in her season’s best toss of 10.88m, Amy Azubuike of Brooklyn’s St. Ann’s School won the shot put.

On Saturday in the Mid School division, New Jersey’s Lauren Princz remained undefeated in the 55 meters after a very fast personal best, 7.17; Peyton Rollins all the way from Medford, MA also ran her personal best 55 meter-hurdles, 8.43 to upset leader Tia Taylor of New Jersey who finished second in 8.46. Rollins now has at least 33 first place wins in major meets including USATF Junior Olympic Championships and AAU Regional and Nationals since her 8th birthday! Brianna Brown of the Bronx won the 200 meters in 25.99 and sat out the 400 meters where she was undefeated, leaving a position filled by Kamani Johns of Chester, PA who ran her own personal best, 59.81 for the win. In the 800 Meters, Alina LaForest also of Chester, PA enjoyed her best Colgate Games’ performance of 2.19.17 for her first win of the series. LaForest is another national age division champion with 14 first place wins since her 8th birthday in 2013, including 400, 800, 1500, and 1600 meter regional and national competitions. With her season’s best 1500 meters performance, 4:47.30, Lauren Heskin of Floral Park, NY remains undefeated now through two Colgate Women’s Games’ seasons.

On Sunday in the Elementary A division, Philadelphia’s Amirah Nesmith continues to surpass her own records. This meet’s near-record setting win in the 55 meters, 7.95 and first place win in the 200 meters, 30.08 are both new personal bests. Da’mira Allen of Chester, PA ran her best Colgate Games’ 400 meters in 68.95, and her personal best race ever in the 800 meters in 2:34.74 for a four meet perfect season of double wins. In the Elementary B division, Philadelphia’s Avery Lewis, who now holds three Colgate Women’s Games records, almost made it four. Lewis finished a perfect season of double wins with a first place 55 meters in 7.65, and 200 meters race in a near record personal best 26.64. Philadelphia’s Kenai Bey-English finished undefeated in her season’s best 400 meters in 63.95, and Alissa Graham won the 800 meters in 2:31.56. Graham of PS44 in Brooklyn has won more than 25 regional and national championships including USATF National Youth and Junior Olympic Championships in distances from 400 meters to the mile!

From thousands of participants, some 430 top point scorers will compete in a semi-finals on Saturday, January 28, 2017 at Pratt to determine who will compete at the New Balance Track and Field Center at the Armory, NYC on Saturday, February 18, 2017, where trophies and educational grants-in-aid from Colgate-Palmolive Company are awarded to top place finishers in each age/grade division.

Coaches, recruiters, athletes and fans can follow scores each week at http://www.colgategames.com/.

Tickets to the Armory finals are free by request at: http://www.colgategames.com/ticket-information.

* Season best statements are based on CWG Results.
** Personal best are based on information from Athletic.net or other results sites online.

This press release was issued on behalf of the news source, who is solely responsible for its accuracy, by Send2Press Newswire. To view the original story, visit: https://www.send2press.com/wire/talent-runs-deep-as-east-coast-track-stars-head-to-semi-finals-after-weekend-of-top-competition/