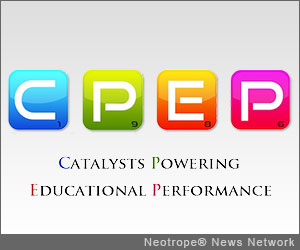 MIDDLETOWN, Conn. /New York Netwire/ — CPEP (Catalysts Powering Educational Performance) is pleased to announce it is a recipient of Neotrope’s 2013 J.L. Simmons Non-Profit PR Grant award. With this commitment, Neotrope(R) will provide public relations support to CPEP over the next year to raise awareness around its programs and accomplishments.

This grant will assist CPEP with promoting its mission of serving as a catalyst to significantly change underrepresented students’ knowledge, attitudes and behaviors related to the pursuit of science, technology, engineering and mathematics (STEM) careers through innovative out-of-school programs. In addition, with 2013 marking CPEP’s 25th anniversary, this grant will showcase CPEP’s anniversary celebrations, including its 25th Anniversary Gala on October 26, 2013.

“We are thrilled to be selected by Neotrope to receive this grant. In addition to the ability to showcase our programs and accomplishments, this partnership gives us the opportunity to recognize and celebrate our 25th anniversary in a way that would not otherwise be possible,” said CPEP CEO Bruce Dixon. “This opportunity provides us with an opportunity to position our organization for the next 25 years.”

Through a variety of programs, CPEP has engaged more than 25,000 underserved and underrepresented students in STEM education over the past 25 years. Many of these students have since graduated high school, pursued STEM education in college and are now successful employees in STEM careers. Ultimately, CPEP has successfully diversified the STEM workforce as a result of its innovative and engaging programs.

As part of this in-kind grant program, Neotrope(R) is providing public relations (PR) solutions, news dissemination (through its Send2Press(R) Newswire service), online advertising, and social media marketing for CPEP. This program is intended to help raise awareness of the 501(c)3 non-profit to traditional media, to the public, as well as potential sponsors and donors, regarding their efforts in the promotion of and engagement in STEM education. CPEP’s goals are to broaden awareness about CPEP’s programs, accomplishments and fundraising efforts.

“With Neotrope’s assistance, we are hoping to engage new and innovative audiences with us,” said Dixon. “Neotrope’s experience and reach combined with our mission and message will help us achieve our vision.”

“We’re honored to be providing assistance to the CPEP, in both sharing their successes and recognizing this milestone year,” said Neotrope CEO, Christopher Laird Simmons; a member of PRSA and ASCAP. “CPEP is proactively working to inspire and prepare students in all economic classes throughout the U.S., to pursue science, technology, engineering and math (STEM) careers. As someone who grew up inspired by technology, and with PhD and math degrees running rampant in our household, I know the value of getting the right nudge to look at tech as being fun and accept the challenges that come with that pursuit.”

In 1986, a group of engineers, college faculty and secondary educators created an innovative out-of-school program designed to inspire and prepare underrepresented and underserved students to pursue science, technology, engineering and math (STEM) careers. Launched in one school with 40 students, CPEP is now in 11 school districts, 42 schools and directly impacting 1,500 students annually across Connecticut.

CPEP serves as a catalyst to change underrepresented and underserved students’ knowledge, attitudes and behaviors toward the pursuit of STEM education and careers. Results indicate there is a consistent 60 percent increase in the percentage of students who desire to pursue a STEM career after just one CPEP experience and 90 percent of CPEP students report acceptance into college.

CPEP has won several awards recognizing the organization for its achievements and accomplishments, including the Turbo Award for Excellence in Nonprofit Management by the Harvard Business School Alumni Association of Connecticut, the Golden Torch Award from the National Society of Black Engineers, the Presidential Award from the National Science Foundation for its Mentor Program in the New Haven Public Schools, and the 21st Century Solutions Award by NBCUniversal Foundation.

With 2013 marking its 25th anniversary, CPEP seeks to leverage its accomplishments to continue to grow and position CPEP to impact the workforce of the 21st century.

Since 1983 Neotrope(R) has delivered services to raise organization awareness including brand identity, marketing, public relations (PR), and SEO services. Neotrope is also an entertainment publishing company involved in books, music, software, and online magazines. The company pioneered the concept of search optimization of press release content back in 1997 and has been at the forefront of many communication and technology movements for three decades. Neotrope was an Inc. 5000 company in 2009. More information: http://www.Neotrope.com/ .

About the Non-Profit PR Grants:

For 2013, the Grant has been named after the company co-founder, the late Dr. J.L. Simmons, PhD, who passed away in April of 2003. Henceforth the Neotrope PR Grant(s) will be known as the “J.L. Simmons Non-Profit PR Grant.”

Additional information regarding the Neotrope 2013 J.L. Simmons Non-Profit PR Grant program for U.S. charitable non-profits and grant recipients can be found at: http://send2press.com/non-profit/ and also http://prgrants.com/ .

Copyright © 2013 New York Netwire™ and Neotrope®. NewYorkNetwire™ is a news publication of the Neotrope News Network and a trademark of Neotrope – all rights reserved. NEWS SOURCE: Catalysts Powering Educational Performance