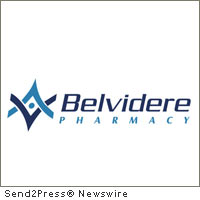 SOMERSET, N.J. /New York Netwire/ — From the blogosphere to mainstream media, there’s been a recent-and disturbing-buzz on a connection between hormone replacement therapy and a higher risk for advanced-stage breast cancer in post-menopausal women. The recent media focus stems from a study published in the October 2010 issue of the Journal of the American Medical Association (JAMA). Practitioners from Belvidere Pharmacy and Balancing Health, both experts in women’s health, examine the issue.

Hormone Therapy, or HT, is often used to treat women suffering from the effects of menopause. As a woman ages, her body produces less estrogen, progesterone and testosterone – creating an imbalance in hormones that often results in hot flashes, sleeplessness, vaginal dryness and fatigue, to name just a few symptoms.

The recent publication is part of follow-up evaluation from the Women’s Health Initiative (WHI) study which began in 1991. Researchers collected data from more than 12,000 women, and found that there was an increase in breast cancer: 385 women on HT developed the disease, as opposed to 293 who took a placebo. The WHI follow-up shows marginally higher breast cancer death rates in the women who took combination synthetic HT.

Breast cancer is the most commonly feared disease in women, so a study of this type makes for a very newsworthy story. But in the wake of public concern, experts warn that the media has told only part of the story. For many patients, the amount of information available about HT is overwhelming, and this recent study in JAMA only adds to anxiety.

To understand the WHI study fully, it is important to understand the design and several key factors that temper the conclusions. A critical factor of the study was the TYPE and DOSAGE of hormones used – specifically, a fixed, oral dose of horse estrogens (Premarin) and chemically altered progesterone (Provera) was taken by all the participants in the group randomized to test the designated medications.

“Many times, when a study such as this is released, the media reports only the highlights, without presenting the limitations of those findings,” said Mary K. Powderly, MD, a board-certified gynecologist and hormone replacement specialist who practices functional medicine with Balancing Health in Somerset, NJ. “With treatment as important as HT, it is critical to have all the facts as well as the knowledge to interpret the studies. It is also important to put these findings in perspective so as not to cause alarm. In terms of absolute rates, the risk of cancer is low.”

“To be clear, there is a definite link between long-term use of synthetic and equine hormones and a small but significant increase in breast cancer risk,” said Powderly. “This study demonstrates that the detection of breast cancer in those taking the drug was similar in cell type and grade compared to breast cancer in the no drug group but the drug group was more likely to have lymph node involvement. It is important to question why that was. For example, did increased breast density, a common side effect of excessive or unbalanced HT, factor in preventing early cancer detection. Also there is some evidence that synthetic progestins may stimulate growth of new blood vessels which could facilitate tumor growth and metastasis.”

“These hormones are not bio-identical to humans,” said Shara Rudner, president of Belvidere Pharmacy in North Plainfield. Rudner is a compounding pharmacist-a highly trained specialist who formulates custom medications for patients. She is an expert in hormone therapies for both women and men.

“Equine estrogens are extracted from the urine of pregnant mares, and medroxyprogesterone is a synthetic hormone-like drug,” said Rudner. “They don’t have the same chemical or molecular structure as the estrogens and progesterone made by the human body.”

Rudner also pointed out that the equine estrogens and medroxyprogesterone in the study are given to patients orally, which has been shown to increase a patient’s risk for blood clots, in addition to other health problems. An alternative, she said, is to give patients transdermal hormones – gels and creams applied easily to the wrist, where low-doses of hormones are absorbed through the skin.

According to Rudner, measuring the patient’s hormonal level and replacing with transdermal, bio-identical hormone therapy (BHT), as needed, is the application of choice among many hormone specialists.

Powderly emphasized that the WHI study fell short on another very important fact. “Since a requirement of the study was for women to be at least 10 years post menopause, the average age of women in the study was 63. Thus, the study population was about a decade or two older than the average age of 45-55 when menopause begins. Since the primary risk factor for breast cancer is age, the older women were at higher risk. In women aged 50-59, the overall mortality rates with hormone therapy appeared to be slightly reduced.”

Powderly also stressed that women need to conduct regular breast self-exams, have scheduled mammograms, follow up testing as directed, and to visit their physicians on a regular basis to monitor breast health.

For women in menopause, HT can help relieve or lessen symptoms such as night sweats, moodiness, sleeping issues, foggy thinking and more. Estrogen has been shown to improve cholesterol ratios as well as protect women from osteoporosis and colorectal cancer. “Estrogen must be balanced by progesterone,” said Powderly. “The key is balance.”

Powderly explained that hormone replacement is a specialty and, when conducted properly, relies on a highly individual approach to each patient. Before a patient is given a dose of any hormone, her own hormonal levels should be measured. No one would think about supplementing thyroid hormones without first measuring levels and following up with monitoring after the hormone was given. Why, Powderly observed, would ovarian hormones be any different?

For patients who want to explore the benefits of HT, it is important for them to find a board-certified gynecologist who is trained in integrative medicine. According to both Powderly and Rudner, proper HT care should include a complete evaluation of signs and symptoms, medical history, assessment of current hormone levels, development of a personalized plan to replace deficient hormones, and follow-up hormonal monitoring. Together, the physician and compounding pharmacist can monitor and tweak the patient’s therapy, establishing and maintaining hormonal balance.

“Low-dose, transdermal, biologically identical HT can have tremendous benefits for many patients,” said Powderly. “There is no reason why a woman shouldn’t explore its advantages with a qualified physician.”

Belvidere Pharmacy is a registered pharmacy in New York, New Jersey, and Connecticut and has been serving its community since 1959. Shara Rudner – a fellow of the International Academy of Compounding Pharmacists, a fellow and regional director of the American College of Apothecaries, a fellow of the American College of Veterinary Pharmacists and secretary of the New Jersey Academy of Compounding Pharmacists-has been owner and president of Belvidere since 1996. Under her leadership, Belvidere became an exclusive compounding pharmacy more than a decade ago. For more information about Belvidere Pharmacy, visit www.belviderepharmacy.com .

Belvidere Pharmacy has been a PCAB accredited™ compounding pharmacy since 2007. For more information about PCAB accreditation visit www.pcab.org .

Copyright © 2010 New York Netwire™ and Neotrope®. NewYorkNetwire™ is a news publication of the Neotrope News Network and a trademark of Neotrope – all rights reserved. NEWS SOURCE: Belvidere Pharmacy