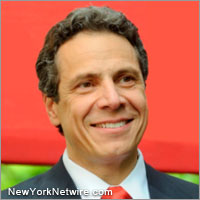 ALBANY, N.Y. /New York Netwire/ — Governor Andrew M. Cuomo today announced that Norampac, a division of the Cascades packaging and paper products company, will build a new facility in Niagara Falls, creating 108 new jobs. The company will invest $430 million in a new, state-of-the-art facility to manufacture “green” packaging material. Empire State Development, together with a number of state and local entities, put together an incentive package to attract Norampac to expand in the Niagara Falls region.

“Norampac’s decision to invest and create jobs in Niagara County speaks volumes about New York state’s commitment to attracting and retaining business,” Governor Cuomo said. “With six Cascades facilities already in the state employing more than 800 New Yorkers, this is another example of businesses realizing the great value of investing in New York. We will continue to work to bring good jobs to New York state.”

Norampac owns several paper and packaging products mills in Canada and the United States. The division operates 37 facilities, four of which are in New York, including an additional plant located in Niagara Falls with 138 employees and three plants located in Lancaster, Maspeth and Schenectady. Based in Quebec, Norampac is the largest containerboard producer in Canada and has nearly 5,000 employees. The new facility will manufacture packaging materials made from recycled fibers.

President, CEO & Commissioner of Empire State Development Kenneth Adams said: “Norampac’s decision to build a new manufacturing facility in Niagara Falls secures its presence in New York state and reinforces Governor’s Cuomo’s message that New York is open for business. I applaud all the state and local partners involved with this project.”

Empire State Development, working with the Buffalo Niagara Enterprise and other local partners, prepared a $142 million incentive package. The inexpensive hydropower and significant incentives were central to Norampac’s decision to locate the new manufacturing facility in Niagara Falls. These incentives include:

New York Power Authority President and Chief Executive Officer Richard M. Kessel said: “We’re pleased to be playing an important part under Governor Cuomo’s leadership in persuading Norampac that New York is the best place for undertaking the significant expansion planned by the containerboard manufacturer. Time and again, the low-cost hydropower from the Niagara Power Project has proven to be a formidable means for spurring capital investments by businesses and creating and protecting jobs in Western New York. The Norampac expansion is a perfect example of the effective results from the packaging of the hydropower with other state and local incentives to attract significant investments to the region and put people to work. It all comes together with this initiative.”

Niagara County Industrial Development Agency (NCIDA) Chairman Henry M. Sloma said: “This announcement is yet another example of the NCIDA working to bring jobs and new investment to the City of Niagara Falls. We are proud to have worked so closely with Empire State Development and the New York Power Authority to make this project a reality.”

New York State Energy and Research Development Authority (NYSERDA) President and CEO Francis J. Murray, Jr. said: “As Governor Cuomo has stated, cutting energy use and improving productivity are good for business and good for our environment. NYSERDA commends Norampac for its work to reduce the energy use at its Niagara Falls facility, and we stand ready to help businesses of all sizes benefit from smart investments that will provide strong returns for years to come and create jobs in New York state.”

Kenneth Daly, National Grid President for New York said: “This project is an excellent fit with the goals of our economic development programs, and reflects the teamwork by all the parties, public and private. Niagara Falls is deeply embedded in the history of our company and our industry and National Grid is very pleased to demonstrate our ongoing commitment to Western New York by helping to bring new investment and jobs to the area.”

City of Niagara Falls Mayor Paul Dyster said: “A hundred years ago, Niagara Falls was the Silicon Valley of its day, with world renowned scientists like Tesla and Edison competing for the public eye. After suffering a decline in traditional industries in the late twentieth century, Niagara Falls is now once again on the rise, creating sustainable new “green” industries for the 21st century. Whether the yardstick is job creation, economic spin-off, investment, or greening the environment, Norampac’s decision to expand here in Niagara Falls is an irrefutable sign that New York state is once again open for business.”

Buffalo Niagara Enterprise President & CEO Thomas Kucharski said: “Buffalo Niagara Enterprise has been working with Norampac officials dating back to 2008 in an effort to convince the company to locate this expansion in the Buffalo Niagara region and today’s announcement is further proof that we can successfully compete for the attraction of manufacturing companies and jobs. I applaud Norampac for their recognition of how our competitive site, meaningful incentives and skilled and affordable workforce will benefit their expansion and I thank them for their commitment to our community.”

New York State Senator Mark Grisanti said: “I’m pleased that such a large investment is going to be made in a facility that will prove to be beneficial to the City of Niagara Falls by helping to provide a positive boost to the local economy. That it will be done through the promotion of an environmentally-friendly process is just icing on the cake for a project that will bring new jobs to the city thanks to the efforts of a brave member of the private sector and teamwork involving several entities, including Governor Cuomo and Empire State Development. My constituents will be pleased to hear that the focus of retaining and creating jobs through the manufacturing of “green” products is just another example of something positive happening here in New York state.”

New York State Senator George Maziarz said: “I commend Norampac for making a substantial investment in Western New York and growing its operations here. This is a great example of how state incentives and low-cost hydropower can translate into the creation of jobs for our 21st century workforce.”

Assemblyman John Ceretto said: “Creating good-paying local jobs is the key to a successful economic recovery. Norampac’s announcement is the culmination of hard work on the state and local level to make our region a more attractive place to do business. This is an important step toward strengthening and diversifying Niagara Fall’s economy and is a move that will help propel the region out of the current economic downturn.”

About Cascades
Founded in 1964, Cascades produces, converts and markets packaging and tissue products that are composed mainly of recycled fibers. The Company employs more than 11,000 employees, who work in more than 100 units located in North America and Europe. Its management philosophy, its experience of over 45 years in recycling and its continued efforts in research and development are strengths that enable Cascades to create new products for its customers. Cascades’ shares trade on the Toronto Stock Exchange, under the ticker symbol CAS.