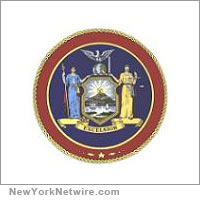 ALBANY, N.Y. /New York Netwire/ — Governor Andrew M. Cuomo today traveled to Nassau County to sign New York’s first property tax cap. The tax cap, a hallmark of Governor Cuomo’s campaign and a priority of his administration’s first year, will finally deliver relief to millions of homeowners and business owners across the state who for too long have been burdened by out-of-control property taxes.

Governor Cuomo signed the property tax cap at the home of James and Janet Gannon in Lynbrook. Like many taxpayers in Nassau County, the Gannons, parents of four children, have made sacrifices to afford the state’s skyrocketing property taxes. They pay nearly $11,000 annually in property taxes, close to three times the median property tax bill in New York state. Mr. Gannon is a small business owner and Mrs. Gannon is a public school nurse at the Shore Road School. This law will provide meaningful tax relief to the Gannon family and other homeowners across New York.

“For decades, taxpayers across New York state have been burdened by back-breaking property taxes that have crippled businesses and families,” said Governor Cuomo. “It is appropriate to sign this property tax cap at the Gannon household, as millions of homeowners like them have had the deck stacked against them for too long. This tax cap is a critical step toward New York’s economic recovery, and will set our state on a path to prosperity.”

Under the new law, property tax increases will be capped at 2 percent or the rate of inflation, whichever is less. Local communities and local voters could override the cap with a 60 percent vote on the budget for school boards or relevant legislative bodies.

Nassau County Executive Edward Mangano said: “For Nassau residents, a long-overdue property tax cap is among the most important accomplishments of Governor Cuomo’s first 6 months. This plan will put an end to sky-high property tax increases and will help our state get back on the right financial track. I supported the Governor’s tax cap during the campaign, I supported it during the legislative session, and I support it now that it’s about to become law. This is a great moment for Nassau County and for all of New York state.”

New York State Senate Majority Leader Dean G. Skelos said: “Enacting a property tax cap was the single biggest accomplishment of this session for millions of homeowners and businesses that are sick and tired of paying the highest taxes in the nation. Senate Republicans heard their concerns, we promised to do everything we could to help and today we are keeping that promise. I applaud Governor Cuomo for joining us in making the property tax cap a priority and for his leadership in getting it done.”

New York State Assemblyman Charles Lavine said: “I worked alongside Governor Cuomo over the past months and our first priority has always been the taxpayers of New York. We are tired of seeing businesses and families forced to move out of Nassau County and New York state because of the back breaking property tax burden. Governor Cuomo has shown tremendous leadership in pushing for this property tax cap and with the highest property taxes in the nation, Nassau County taxpayers stand to greatly benefit from this historic legislation. I look forward to continuing to work with Governor Cuomo and my colleagues to make our state a better place to live and work.”

This cap on property taxes includes safeguards to ensure delivery of critical services for New Yorkers. There will be limited exceptions to the cap, including:

•Judgments or court orders arising out of tort actions that exceed 5 percent of the localities’ levy
•Certain growth in pension costs where the system’s average rate increases by more than 2 percentage points from the previous year; the amount of contributions above the 2 percentage points will be excluded from the limit
•Growth in tax levies due to economic development