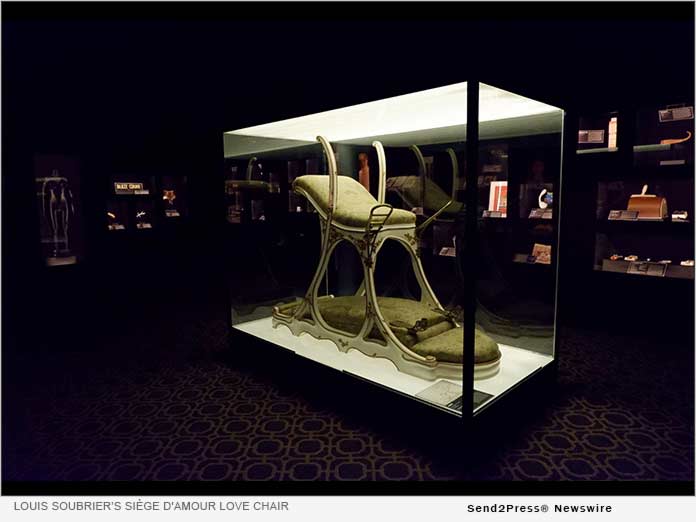 Artist Zoya Cherkassky recently detoured from her usual practice to explore the topic of female sex work in a series called “Women Who Work.” In this drawing, Cherkassky beautifully and hauntingly portrays the disassociation and alienation many women experience during sexual intercourse and intimacy. Inspired by the horrific story and subsequent Russian mythologization of Viktor Mokhov, who abducted two teenage girls in 2000 and held them hostage as enslaved sex workers for four years in a bunker, the drawing highlights the power dynamics, abuse and fear that can accompany sex and the sex work industry.

Specially designed in 1890 by French cabinet-maker Louis Soubrier for King Edward VII (1841-1910), the Prince of Wales and King of England from 1901 to 1910, who was also known as “Dirty Bertie,” the love chair enabled the infamous playboy prince to partake in sexual amusement with minimal exertion in numerous ways, including with two ladies at once. Le Chabanais, one of the extravagant brothels of nineteenth and twentieth century Paris, kept the original chair in a private room for the future king’s personal use. While the exact chair used by “Dirty Bertie” is now owned by Soubrier’s great-grandson, the example on view at the Museum of Sex is one of just two replicas based on the original design. The only other known replica is on view at the Sex Machines Museum in Prague. The chair has been featured in both BBC and Smithsonian documentaries such as the “Private Lives of Monarchs.”

ABOUT THE MUSEUM OF SEX

The mission of the Museum of Sex is to preserve and present the history, evolution, and cultural significance of human sexuality. Since opening in 2002, the museum has collaborated with world-renowned cultural institutions, artists, and academics to create exhibitions and interactive programs that explore the best in current scholarship in the arts, sciences, and humanities. From fine art to historical ephemera, its permanent collection comprises more than 15,000 sexually significant artifacts.