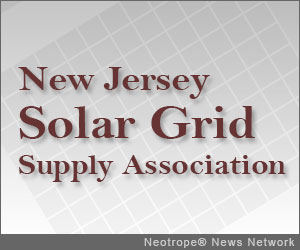 “The formation of this Association is long overdue,” said Spano. “Grid supply solar is an important part of the solar industry whose value has been largely disregarded over the last two years.”

The Association’s goal is to demonstrate by providing factual data regarding the exceptional advantages of grid supply solar to the public at large, to the towns in which they are built, as well as to the policy makers responsible for meeting the Renewable Energy Standards established by the State. These projects provide large numbers of good jobs as well as clean reliable power at peak periods that benefits all New Jersey’s ratepayers, not just those with solar on their roofs.

From their common experience, the group confirmed that key decisions are currently being considered that threaten the destruction of this industry sector, resulting in the loss of hundreds of millions of dollars of investment and the NJ jobs that come with that significant investment at a time when unemployment has affected so many NJ residents.

Renewable energy attorney, Mark Bellin noted that “It is critical that key policy makers understand the facts and the consequences of the decisions they are about to make.”

The Association has been formed to unite the solar grid supply industry and better educate the public and the regulatory agencies in order to encourage participation of all sectors of the solar industry in New Jersey. The Association stated in no uncertain terms that policies implemented by the New Jersey Board of Public Utilities have effectively halted the construction of grid supply solar generation and blocked significant and needed investment in the state, notwithstanding the benefits that are demonstrated in virtually every other state with significant solar investment where Grid Supply projects have been the leading contributor to jobs growth.

* As opposed to the “net-metered” alternative, in which all of the solar power is used exclusively by the owner of the solar facility, grid supply solar electricity is distributed into the grid benefitting all of New Jersey’s ratepayers.

* Grid supply solar delivers its biggest output at peak demand periods, on hot summer days, thus providing lower cost power and support to the power grid when it is needed the most in the most efficiently designed systems.

* Grid supply solar also is ecologically beneficial in that it retains the underlying characteristics of the ground as opposed to alternative developments that were typically approved for sites that grid solar projects are built on where buildings and parking lots would be developed in that solar projects are above ground on posts.

The group is currently preparing reports and a public education program supporting their case that will be rolled out beginning next week.