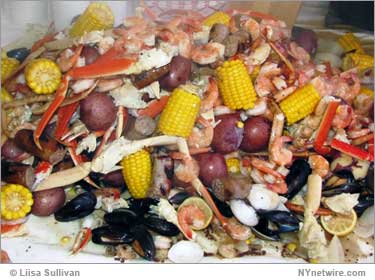 ARTICLE: Often, when people think of New York City, they think of Manhattan, but New York City is actually comprised of five boroughs: Manhattan, Brooklyn, Queens, Staten Island and The Bronx. As of 2009, stats released by the U.S. Census Bureau revealed that Brooklyn is the “most populated” followed by Queens, Manhattan, The Bronx and Staten Island.

There are many things to do and see in all of these boroughs, but a fun thing to do during the summer is to eat your way through some of the best seafood haunts around. Here is just a short sampling to whet your appetite:

Brooklyn: Sheepshead Bay is a Brooklyn neighborhood that was originally named for a fish called “Sheepshead,” a member of the porgy family. Today, this fish is more prevalent in southern waters, but it once filled this Brooklyn bay before mysteriously disappearing. Despite the disappearance of the sheepshead, this seaside neighborhood still maintains a reputation for being one of the best places in Brooklyn to indulge in some savory seafood. Randazzos Clam Bar is probably the most famed. In fact, during the course of 75 years in business, it has truly become a landmark. People from all over the city come to feast on succulent lobster; mussels; shrimp; clams; calamari; and more. Jordan’s Lobster Dock is also worth a visit. Rich and thick seafood chowders (Manhattan and New England style), lobster rolls, softshell crab and steamer clams all grace the menu of this family-owned restaurant that has proudly served diners since 1938.

Queens: Queens is home to Rego Park and also to the well-known London Lennie’s. Family owned and operated since 1959, this seafood establishment has gone from being a great place to stop into for some fish-n-chips to being one of the premier seafood restaurants in Queens. The menu offers local seafood, selected daily, from the world-famous Fulton Fish Market (formerly located in lower Manhattan; it moved to Hunts Point in The Bronx in 2005.) London Lennie’s is also home to one of the area’s finest raw bars where they offer more than just the traditional oysters and clams on the half shell. They also offer sushi and sashimi, shellfish towers and even…castles. As an appetizer, a shellfish castle will easily feed four to six people and includes: one whole lobster, eight shrimp, six clams, six oysters (chef’s choice), 16 mussels, and six snow crab claws.

Manhattan: The Pearl Oyster Bar in Manhattan’s Greenwich Village neighborhood is probably best known for bringing the lobster roll to Manhattan (and the fried oysters are pretty darn good too!) In fact, when Tony Soprano of the HBO series “The Sopranos” woke up from his coma, the first thing he wanted to eat was a lobster roll from Pearl Oyster Bar. This seafood destination relies heavily on what is available at the local level, so diners are best to come in and check the blackboard for the daily specials.

The Bronx: City Island is actually a small island that is part of The Bronx and has a population of about 4,500. It is also home to The Lobster Box, a City Island landmark that boasts amazing views of the Long Island Sound; seafood always seems to taste better when looking at the water. In business since 1946, the Lobster Box remains consistent and fun. One of their most popular items is the Lobster Box Clam Bake which includes: one whole 1 1/4 pound Maine lobster, clams, mussels, corn on the cob and a baked potato for $35.95.

Diners can enjoy their fare on an ocean-breeze deck or inside while taking in sweeping ocean views and also views of the nearby Verrazano Bridge. Colossal crab martinis and coconut shrimp rolls are among the top faves. The menu boasts elegant entrees such as salmon strudel with lump crab and asparagus and also more casual fare such as the lobster macaroni and cheese.

Keep in mind that this is only a short list of places to explore. So, have fun doing your research and bon appétit!