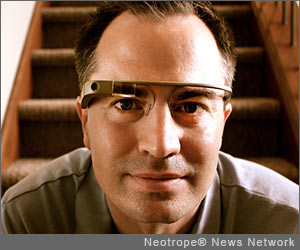 In February 2013, Google ran a contest on Twitter inviting the public to share, in 140 characters or less, what they would do with Google Glass if they were selected to buy what has been called by some, “a smart phone on your head.”

A tweet made by David Ciccarelli on February 21, 2013 sealed the deal as he promised, “As an audio engineer, I will do something incredibly entrepreneurial with sound or the human voice.”

After some hometown publicity in the London Free Press, Ciccarelli made his way to Toronto where he was interviewed on national television and broadcast radio, sharing the new technology and discussing how he sees Google Glass making its mark on the world.

After appearances on CTV’s Canada AM ( http://canadaam.ctvnews.ca/video?playlistId=1.1357725 ), Ontario Morning and Metro Mornings on CBC Radio 1, as well as coverage on CBC news, Ciccarelli has been able to share Google Glass with millions of people across the nation.

Newly minted Google Glass Explorer, David Ciccarelli, is the co-founder and CEO of Voices.com, an award-winning online marketplace that connects clients with voice-over talent. David is an honours graduate of the Ontario Institute of Audio Recording Technology and an alumnus of the entrepreneurship program hosted by the Ivey School of Business.
About Voices:

Voices.com is the online marketplace that connects businesses with voice over talent.

Copyright © 2013 New York Netwire™ and Neotrope®. NewYorkNetwire™ is a news publication of the Neotrope News Network and a trademark of Neotrope – all rights reserved. NEWS SOURCE: Voices.com