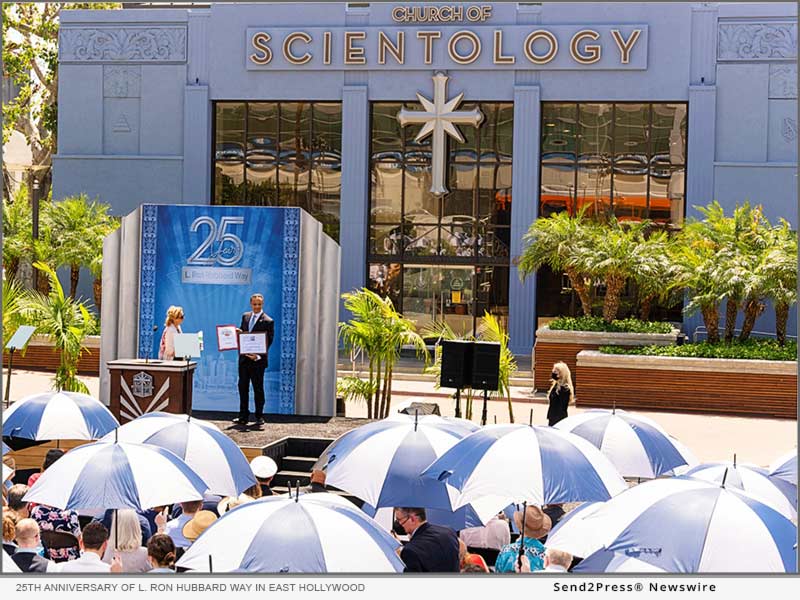 LOS ANGELES, Calif., Apr 11, 2022 (SEND2PRESS NEWSWIRE) — State and city officials joined Scientologists, friends and community leaders from across Los Angeles in East Hollywood April 9 to celebrate the 25th anniversary of the dedication of L. Ron Hubbard Way, named for the Founder of the Scientology religion.

The street is home to the Church of Scientology Los Angeles and advanced Scientology Churches that serve parishioners from across America, and is a crossroads for the world’s largest community of Scientologists.

City and state officials who took part in the original dedication were among the crowd celebrating the milestone.

In preparation for the street’s dedication 25 years ago, the Church renovated the entire city block from Sunset to Fountain. Hundreds of volunteers participated in the project which included undergrounding all electrical wiring, pouring new sidewalks, landscaping the tree-lined avenue, and creating the street itself by laying 150,000 bricks.

Ms. Thomasian, who helped coordinate the project between the Church and L.A. City Council, said, “It is great to be here to celebrate the 25th Anniversary of the creation of L. Ron Hubbard Way. Few other staffers here today can say they were actually part of the creation and I’m honored to say I was.” She presented the Church with a California flag flown over the California State Capitol in Sacramento on behalf of State Senator Durazo.

In addition to serving as a home to Scientologists from across Greater Los Angeles, L. Ron Hubbard Way is also a community hub, hosting festivals, markets, and family fun days for East Hollywood families. Case in point, that same afternoon, L. Ron Hubbard Way featured the Church’s annual Spring Fair, open free of charge to the community. It included an artisan market and some of L.A.’s favorite food trucks. And for the kids, there were pony rides, face painting, a petting zoo, and other games and treats.

For more information on L. Ron Hubbard Way, watch Inside a Church of Scientology on the Scientology Network, which debuted the day the network launched in honor of the Founder’s birthday in 2018. Also featured in the launch special was an introduction to the network by Mr. David Miscavige, ecclesiastical leader of the Scientology religion.

This press release was issued on behalf of the news source, who is solely responsible for its accuracy, by Send2Press Newswire. To view the original story, visit: https://www.send2press.com/wire/celebrating-the-25th-anniversary-of-l-ron-hubbard-way-in-los-angeles/