ARTICLE: Growing up in Brooklyn, New York, I spent many days exploring this most populated of the five city’s boroughs. During the course of that time, I came across areas that provided some truly amazing views of the Manhattan skyline – all from very different perspectives. 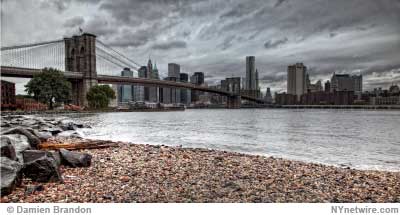 Sunset Park
Two of these views were discovered in my grandmother’s neighborhood of Sunset Park, located in the western part of the borough. At the heart of this area is a park that runs from 41st street to 44th street, between Fifth and Seventh Avenues. It is also home to the second highest point in Brooklyn. I attended grammar school in this area and have fond memories of summer days spent in this park – enjoying its pool, big oak trees that provided welcomed shade and taking in the hot and hazy views of the city that spanned over the notorious Brooklyn.

The second view from this neighborhood was discovered at Green-Wood Cemetery, a national historical landmark. Living in Brooklyn, finding open green space was a challenge, and my grandmother would often take me for long walks in this cemetery. What is referred to as Battle Hill, within this cemetery’s walls, has one of the best views of lower Manhattan and the Statue of Liberty. If you don’t wish to venture out on your own, trolley tours are regularly conducted for $15.

Bay Ridge
Bay Ridge, an adjacent neighborhood, also boasts one of the best views from the 69th street pier. It is also the neighborhood where I grew up and attended junior high and high school. This amazing view is also of lower Manhattan and while visitors take in sweeping harbor views, they can also enjoy some of the local fishing color. Sports fishermen come from all around the borough to fish the waters of “The Bay Ridge Anchorage,” and along the seawall promenade which runs south from the pier to the Verrazano Narrows Bridge.

Additionally, if I stuck my head out of my bedroom about eight inches and craned my neck towards the west, I could get a pretty cool glimpse of the Statue of Liberty.

Brooklyn Heights
After attending college in upstate New York, I returned to my city roots, received a graduate degree from the New School for Social Research in Manhattan and subsequently got married and moved to Brooklyn Heights. This neighborhood sits near the base of the Brooklyn Bridge and is home to one of the most documented views of the Manhattan skyline – the Brooklyn Promenade, a third-of-a-mile stretch along the Brooklyn-Queens Expressway (BQE). This view has appeared in many movies throughout the years including: Moonstruck; Annie Hall; Prizzi’s Honor; the Godfather; and more.

Williamsburg
Not too far from Brooklyn Heights, visitors will discover Williamsburg. This eclectic neighborhood became popular for artists to move to in the 1970s due to its low rent rates. It has since evolved into a destination for not only artists, but foodies and musicians alike. Alma, a landmark in the New York dining scene, opened in 2002. The roof deck is opened year round (heated in the winter and open air in the summer) and offers one of Manhattan’s best panoramic views. It’s the ideal place to take in a city sunset, and to enjoy a margarita and some tasty Mexican fare as well.

This neighborhood is also home to the East River State Park, a location which offers unadulterated views of the Empire State Building, Met Life Building and the Williamsburg Bridge.

Explore On Your Own
Keep in mind that this is only a small sampling of some of my favorite view vantages. Explore on your own; you’re sure to locate some of your favorites in no time. Views can be had from so many places ranging from subway platforms and apartment rooftops to roller coaster crests (yes, I’m referring to the world famous, Cyclone, at Coney Island) and lifeguard station platforms. Go see what you can find!